From Fulcrum MUSH Wiki
Jump to navigation Jump to search

This map represents the major neighborhoods of the Twin Cities, with the exceptions of Wayzata, which is to the west of Minneapolis, the Minneapolis-St. Paul International Airport which is tucked into the little square at the bottom of the map, Fort Snelling and the Fort Snelling State Park below the airport, Bloomington south of Minneapolis, and Prior Lake which is much, much further south. 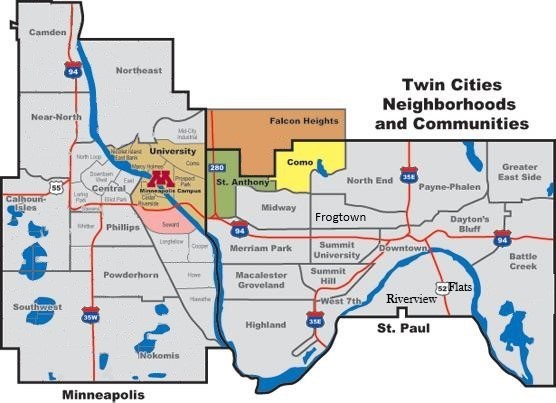 The area is commonly known as the Twin Cities after the metro’s two largest cities, Minneapolis and Saint Paul. Minnesotans often refer to the two together simply as "the cities". It has the second largest economy in the Midwest.

The two major cities in the metropolitan area, Minneapolis and Saint Paul, are independent municipalities with defined borders. Minneapolis sits mostly on the west side of the Mississippi River on lake-covered terrain. Although a majority of the city is residential neighborhoods, it has a downtown area with some new growth, especially in the Mill District and the Warehouse District. Minneapolis also has a popular uptown area. Saint Paul, which sits mostly on the east side of the river, has quaint tree-lined neighborhoods, a vast collection of well-preserved late-Victorian architecture, and a number of colleges. Both cities are known for their natural features of woods, lakes, hills and creeks.

Originally inhabited by Ojibwe and Dakota groups, the cities were subsequently settled by many groups of Europeans. Minneapolis was strongly influenced by early Scandinavian and Lutheran settlers, while Saint Paul was settled predominantly by French, Irish and German Catholic communities. Today, both urban areas are home to a few new immigrant communities, including Somali, Hmong, Oromo, Cameroonians, and Liberian groups.

Total Population as of 2014

Along with much of Minnesota, the Twin Cities area was shaped by water and ice over the course of millions of years. The land of the area sits on top of thick layers of sandstone and limestone laid down as seas encroached upon and receded from the region. Erosion caused natural caves to develop, which were expanded into mines when white settlers came to the area. In the time of Prohibition, at least one speakeasy was built into these hidden spaces—eventually refurbished as the Wabasha Street Caves in Saint Paul.

Lakes across the area were formed and altered by the movement of glaciers. This left many bodies of water in the region, and unusual shapes may appear. For example, Lake Minnetonka out toward the western side of the Twin Cities consists of a complex arrangement of channels and large bays. Elevations in the metropolitan area range from 1,376 feet (419 m) above sea level in the northwest metro to 666 feet (203 m) at the edge of the Mississippi River in the southeast.

Owing to its northerly latitude and inland location, the Twin Cities experience the coldest climate of any major metropolitan area in the United States. However, due to its southern location in the state and aided further by the urban heat island, the Twin Cities is one of the warmest locations in Minnesota. The average annual temperature at the Minneapolis–Saint Paul International Airport is 45.4 °F (7.4 °C). Monthly average daily high temperatures range from 21.9 °F (−5.6 °C) in January to 83.3 °F (28.5 °C) in July; the average daily minimum temperatures for the two months are 4.3 °F (−15.4 °C) and 63.0 °F (17.2 °C) respectively.

A normal growing season in the metro extends from late April or early May through the month of October. The USDA places the area in the 4a plant hardiness zone.

Minneapolis–Saint Paul is also a major center for religion in the state, especially Christianity. The state headquarters of five major Christian churches are found here: the Roman Catholic Archdiocese of Saint Paul and Minneapolis, the Episcopal Diocese of Minnesota, the Presbyterian Synod of Lakes and Prairies, and The Church of Jesus Christ of Latter-day Saints (LDS Church). The Presbyterian and LDS churches both have missions in Saint Paul, Minneapolis, and Bloomington as well as the Orthodox Church in America.

The Twin Cities are home to a Jewish population of approximately 64,800 individuals, with about 31% of Jewish households living in Minneapolis suburbs, 24% in Minneapolis, 16% in St. Paul, 14% in the St. Paul suburbs, and the remaining 15% in outer suburbs.[56] There is also a Hindu temple located in the Twin Cities suburb of Maple Grove. A recent influx of immigrants from Laos and Northern Africa has brought many more religions to the area. There are several Islamic Masjids in the area. There is a temple for the religion of Eckankar in the suburb of Chanhassen known as the Temple of Eck. In addition, many Hmong and Tibetan Buddhist peoples live in Saint Paul; a Hmong Buddhist temple opened in suburban Roseville in 1995.

The Twin Cities' economy is the 13th largest in the U.S. and ranks second in the Midwest. The Minneapolis–Saint Paul area also ranks as the second largest medical device manufacture center in North America and the fourth-biggest U.S. banking center, based on total assets of banks headquartered in the metro area, ranking behind New York, San Francisco, and Charlotte, N.C. metropolitan areas.

The Federal Reserve Bank of Minneapolis covers the 9th District of the Federal Reserve System, which is made up of Minnesota, Montana, North and South Dakota, northwestern Wisconsin, and the Upper Peninsula of Michigan. Its geographical territory is the third largest of the 12 Federal Reserve banks.