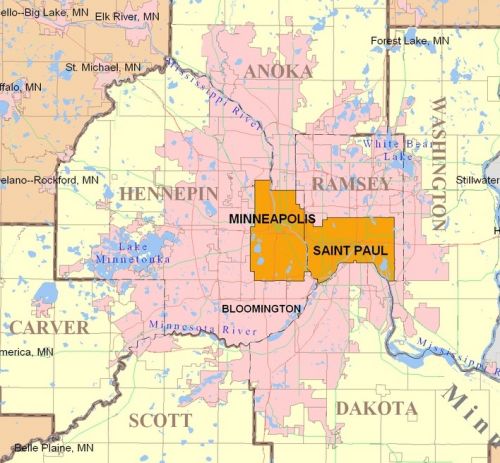 Everything in the map, that is pink, is part of the third ring penumbra. There, the Gauntlet rating is a 9. Travel through this portion of the penumbra is extremely slow - all travel time is doubled (for spirits too), and spending Rage for extra actions in this portion of the Penumbra costs an additional Rage per turn (regardless of the number of extra actions.
Garou Gifts that cost Rage cost 1 additional point of Rage. Gifts that cost Gnosis but not Rage cost 1 more point of Gnosis. Spirit Charms that cost Essence cost 1 additional point of Essence.
Weaver spirits are immune to all of these effects, and enjoy the benefit of all rolled actions by weaver spirits being at a -1 difficulty. This includes rolls to activate Charms.
Other Effects: Kinfolk of all Shifter races that spend much time in the area — animal and human alike — cannot pass their Shifter blood to their cubs. Their offspring are born as ordinary humans without exception. It is unknown what the effects are on Shifters themselves.

Summoning: The Third Ring Penumbra absolutly has an impact on summoning spirits. If you are inside the orange section, difficulties to summon are increased by 2 for All races, unless the spirit summoned is already inside the orange section of the map. The same is true for successes, if a spirit has to cross the Ring, you will need additional successes as determined by the storyteller. It is very possible to get successes, but have no spirit arrive as they can not make it through.

Looks Like in the Umbra: These suburbs of the twin cities appear to have been mystically sanitized, as if every spirit that lived there was driven away or obliterated. Only Weaver spirits appear in this area unless forced to be there through other means (ie, summonings, attached to PC somehow). Those forced to be there are not happy to be there, at all.

Lowering the Gauntlet: Lowering the rating of the Gauntlet in the Third Ring is improbable. Gifts, PATs, Spells, Fetishes, Merits and other assorted methods that lower the Gauntlet or the difficulty to enter it, do not work here as expected.

Items are only considered dedicated if they are jnoted. Putting something in your pocket does not allow you to treat the item as dedicated. You will not lose renown for dedicating weaver items. A common 3 items might be: 1 knife, 1 outfit and 1 phone.

Spirits inside the Cities

In spite of the Third Ring, inside the cities, the Umbra is teeming with the usual life you would expect. The spirits are generally angrier, more frustrated or more scared due to what surrounds them. Outside spirits are rare, but happen on occasion. Be mindful of what you summon, it may be stuck and blame you for it.